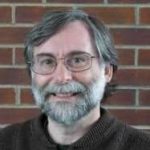 WCPP 2019 session chair and invited speaker Claude dePamphilis is a Professor of Biology at Penn State University.  He earned his undergraduate degree in Biology at Oberlin College and graduate degrees at the University of Georgia, where he studied population genetics, pollination biology, and evolution. After thinking about parasitic plants as fascinating oddities for many years, his "aha moment" with parasitic plants came in 1986 when he realized that parasitic plants were powerful "evolutionary mutants" for the study of plant genomes and gene function.  He secured a postdoctoral fellowship in 1988 to study the evolution of the plastid genome of the non-photosynthetic parasite Epifagus, in the lab of Jeff Palmer, and has continued to research parasitic plants with a passion ever since, including molecular analyses of every major group of parasitic plants. For the last 11 years, with the initiation of the Parasitic Plant Genome Project and other collaborations, his focus has largely been to generate and leverage comparative genomic data in the search for and experimental testing of 'genes that matter' in parasitic plant - host plant interactions.

https://www.wcpp2019.org/testimonials/claude-depamphilis/
We use cookies to ensure that we give you the best experience on our website. If you continue to use this site we will assume that you are happy with it.OkNoPrivacy policy
Revoke cookies